Ground-penetrating radar (GPR) is an advanced practical application that offers experienced professionals with a deeper understanding of the underground environment.

The GPR output is a series of radar wavelet traces or scans produced on a chart recorder or computer screen as an antenna is pulled across the ground surface. 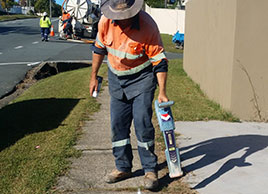 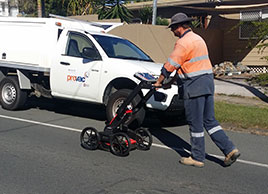 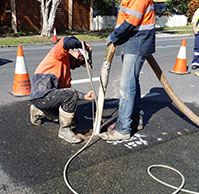 The transmitting antenna of the GPR radiates short pulses of the high frequency (usually polarized) radio waves into the ground. When the wave touches a buried object or a boundary with different dielectric constants, the receiving antenna records variations in the reflected return signal.

The principles involved with the GPR technology are similar to reflection seismology however the electromagnetic energy is used instead of acoustic energy. These reflections, unlike that of acoustical waves, occur at the interfaces of materials of differing electrical conductivity or permittivity.

Ground-penetrating radar (GPR) allows us to separate particular facts concluding with the finest of details as to the details and shape of sub surface reflectors or object features in plan view.

The depth range of GPR is limited by the electrical conductivity of the ground, and the transmitting frequency. As conductivity increases, the penetration depth also decreases. This is due to the electromagnetic energy being more quickly dissipated into heat, causing a loss in signal strength at depth. Higher frequencies do not penetrate as far as lower frequencies, but give better resolution. Optimal depth penetration is achieved in dry sandy soils or massive dry materials such as granite, limestone, and concrete where the depth of penetration could be up to 15m. In moist or clay laden soils and soils with high electrical conductivity, penetration can be significantly less. Under normal circumstances a reliable GPR depth indication would be in the region of 3m to 4m.

Ground-penetrating radar (GPR) can be used in a variety of media, including rock, soil, ice, fresh water, pavements and structures. It can detect objects, changes in material, voids and cracks.

Ground-penetrating radar (GPR) is used in many applications in a various fields and industries.

Ground-penetrating radar (GPR) is used by archaeologists for mapping archaeological features and cemeteries and by law enforcements for locating clandestine graves and buried evidence. In the military, GPR is used to detect unexploded ordnance, mines and tunnels.

(GPR) is used in the field of Earth sciences to study bedrock, soils, groundwater and ice.

Ground-penetrating radar (GPR) is used in engineering applications including nondestructive testing of structures and pavements, locating buried structures and utility lines and to study soils and bedrock.