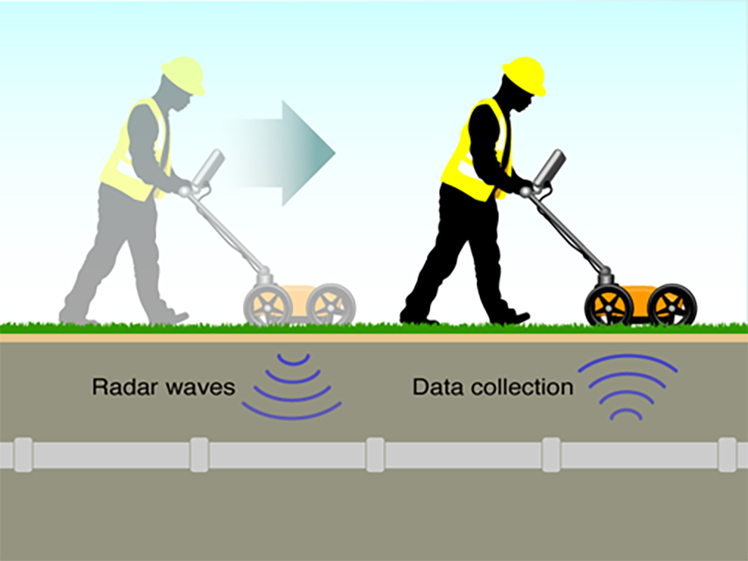 What is Ground Penetrating Radar?

A Ground Penetrating Radar, which is most often referred to as a GPR, is a specialist piece of equipment which uses geophysical science to gather data from beneath the earth’s surface. A GPR uses radar waves which penetrate the ground to collect data from underneath the ground. A GPR is often used by underground utility locators, archaeologists, geophysical engineers and military personnel.

How does a GPR work?

Ground Penetrating Radars project electromagnetic radiation waves which travel through the earths subsurface and reflect back signals and images of subsurface structures. (As seen in the illustration) As a GPR is rolled across the surface of the ground the radar waves detect density differences in the soil which often identify structures and objects such as trenches, pipes, cracks, voids and any drastic changes in material properties.

The performance, results and accuracy of a GPR rely heavily on the condition of the ground beneath the surface. For example. A GPR will project much more accurate and clearer results in a sand & soil-based environment as opposed to a rocky based environment. This is because the radar waves have a clearer path to any subsurface structures which might be present.

Why do we use GPR’s?

At Provac Australia we use Ground Penetrating Radar’s to complement our traditional electronic locating methods. Each one of our service locating vehicles are equipped with a GPR and our DBYD accredited locating team have positive results and experience in using GPR methods to complete service locating jobs.

The main reason we use GPR is to identify services which are nonconductive and impossible to trace using traditional electronic location methods. GPR methods are often used to assist us when we are locating water, sewer and stormwater pipes which are often made out of PVC, polyethylene and asbestos cement. These materials do not conduct Eletronic signals when using traditional loctating methods.